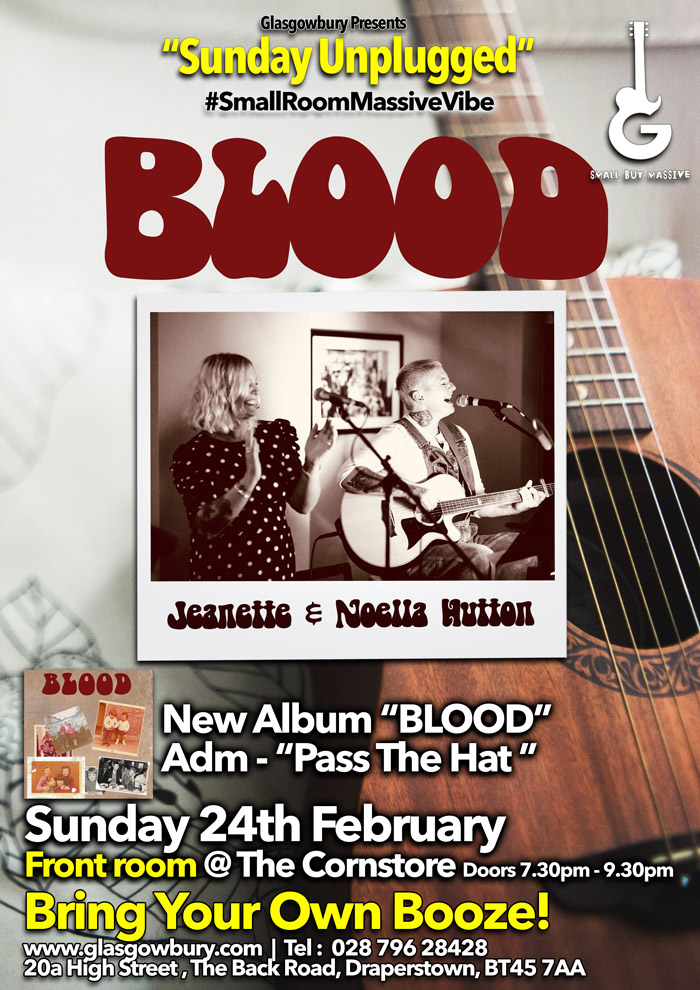 The formation of BLOOD has been a project of years in the making. Sisters Jeanette and Noella have been involved in the music game for many years. Both began their individual musical careers at an early age at Primary School with choirs, folk groups etc. Both progressed to quite different musical careers. Noella as a very successful singer/songwriter and Jeanette successfully fronting a number of rock bands. Both have many different musical tastes but have always shared the same love and passion for all kinds of music delivered from the heart..

And so it came to pass that after many years of individual adventures across many parts of the world, both sisters settled in Derry and figured it was time to get the album done. They truly believed they couldn’t and shouldn’t ever push this.. When the time was right it would happen naturally for them and without fuss.

They began their project in the Summer of 2017. None of their writing days ever felt forced, they were usually made up of laughter, tears and a fair few cups of coffee and yarns.. J They never really had a recipe, theme or concept. They both agreed to follow their hearts and see where it would take them… And, here they are..

They are two very proud souls who are overwhelmingly delighted that they have finished such a personal project. They are without a shadow of a doubt, very proud of their work both lyrically and musically. Each tune tells a very different story and will hopefully connect with the majority of people in terms of the stories they tell. They are both bursting with excitement at the prospect of sharing their album and watching this space to determine where it will take them. They are well up for sharing their album as far and wide as the Universe will allow.

They state how working on their album has been a total pleasure for them both to work together and enjoy the wonderful blood harmonies and connections they have been blessed with naturally. They will never take their musical gifts for granted.

Bring Your Own Booze

Lost your password? - Close
‹ › ×
Stay up to date!
Subscribe to our email newsletter today to receive updates on the latest News, Events and Workshops!
We respect your privacy. Your information is safe and will never be shared.