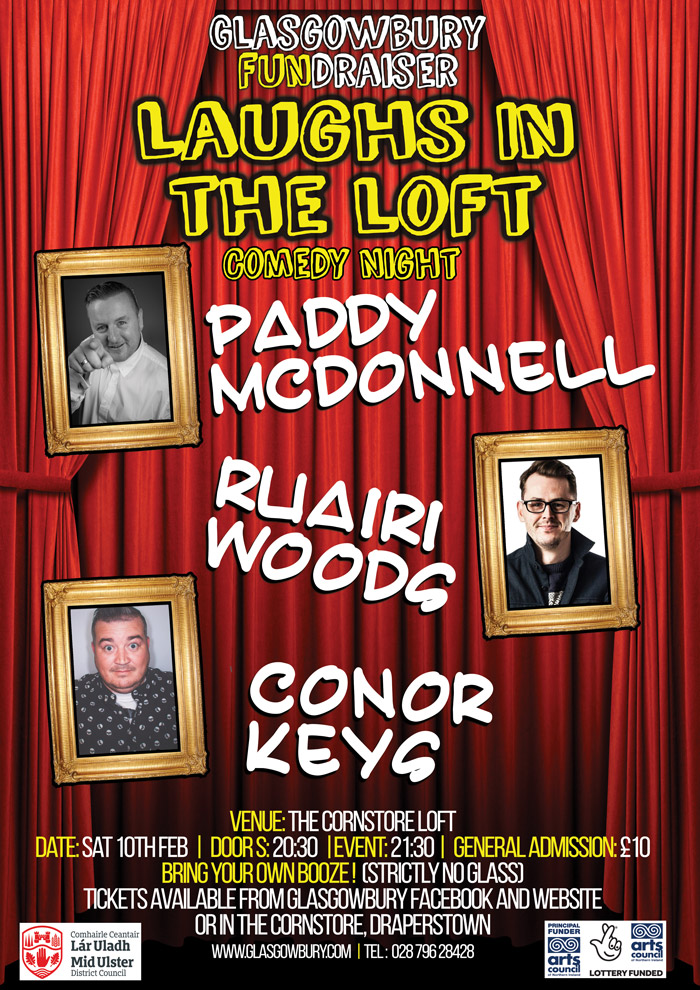 Glasgowbury FUNdraiser – Laughs In The Loft

Paddy McDonnell is one of the fastest rising talents on the Northern Irish comedy circuit. Whether gigging on his home turf of West Belfast or taking his hilarious tales of everyday life around the country, Paddy has won over audiences with his uncompromising, insightful material.
Taxi driver by day, Funnyman by night, Paddy has raked up thousands of gig miles since first exploding onto the stage in 2010. He has performed many times at Belfast’s prestigious Empire Laughs back and Queen’s Comedy Clubs, as well as all the main clubs in Dublin.
Paddy has also stormed the Legendary Stand Comedy Clubs in Edinburgh and Glasgow, as well as the Hot Water Comedy club in Liverpool, and has won comedy competitions at Molly’s Parlour, Lisburn, and Molly Brown’s, Newtownards.
He has appeared on the bill with a host of big names, including Patrick Keilty, Ardal O’Hanlon, Des Bishop, Daniel Sloss, Tom Stade and Mike Wilmot. In 2012 he premiered his one-man show ‘Dagger’ at the first Belly Laughs comedy Festival to rave reviews.
As popular with fellow comedians as he is with audiences of all ages, genders and flag preferences, Paddy brings raw energy and excitement to the stand-up scene.

Strabane born funnyman now based in Belfast. Ruairi Woods will join us on the 10.02.18 here in G HQ for the first time ever!

Two Songwriters playing to small intimate crowd in the Cornstore’s Front Room. This week we have Jonny Nutt, who has released his first Solo Album – Songs of Yesteryear
http://jonnynutt.com/releases

Tweets by glasgowbury
Lost your password? - Close
‹ › ×
Stay up to date!
Subscribe to our email newsletter today to receive updates on the latest News, Events and Workshops!
We respect your privacy. Your information is safe and will never be shared.